In April 2019, a bunch on Hive, the crypto blogging platorm on which I play, launched a monthly competition with a theme.  We then choose our top 3 within that theme, and explain why we’ve chosen them.  There is the chance of winning something, but that’s not why I participate.  In the first two, I happily participated – one was comedy films (and you can read my entry here). The second continued the film theme, and was yes, tunes from the movies, a topic that I really could get into, which is why I participated – and went a trifle over the top.  That entry is here.

This month, is a somewhat different story – it centres around children’s TV programmes.  The full details are here, but suffice it to say, that kids’ TV programmes and I, well, we didn’t have a relationship.  The theme, however, did get me thinking about what I may, or may not have missed.

Television arrived in South Africa in 1976, a seminal year in my life and in South Africa.  This last had nothing to do with TV or me;  it was the year that South Africa’s black youth rebelled against the use of Afrikaans as the medium of instruction in schools.  That will be 43 years ago on June 16th.  For me, it was significant because it was the year I went to boarding school.

Neither of these events have anything to do with children’s TV, obviously, except that it was only at boarding school that I got to watch television.  There, television-watching was tightly controlled and most certainly not in the afternoon after school – that time was reserved for sport, homework and just generally getting on with “stuff”.  When I went home for the holidays, there was no TV, either, so we would watch selected programmes, next door, with our tv-owning neighbour.  I think it must have been three or four years later that my parents acquired a television.  It had certainly happened by 1981 because a crowd of my uni mates invaded my parents’ livingroom to watch the wedding of the century (as far as we were concerned):  Prince Charles to Lady Diana Spencer.

I am reaching an age – yes, I have to use that word – when I realise that I grew up in a world that today’s generation finds inconceivable.  No television.  I concede that I know people who have completely eschewed the box, but they are far and few between.  My parents came to South Africa in 1966;  I was three.  I have a distant memory of our sitting room in Bridlington, Yorkshire, and a black and white television set. The next time I saw one, was not in anybody’s home, but rather in the Journalism Department at Rhodes University. It must have been 1974 and was part of a holiday activity organised by the Sunday School.  It’s also the first time I stood in front of a TV camera.  Saturday was the most recent – more of that if, perhaps, when, the programme is aired, and includes a snippet of that two minute interview.

Returning to toddler Fiona’s “memory” of TV, my mother used to tell me about Pogo.  I believe that I once owned a pogo stick.  And Camberwick Green.  Both also “came” in comic form which we received from England, with Camberwick Green, a large, hardcover annual publication.  We only had one, and I read it over and over.  There was, of course, the radio and on the station to which my parents listened, was an afternoon slot, Little People’s Playtime, at around 3pm.  I have no idea of its duration, but I do remember that it included serialised renditions of Enid Blyton’s Noddy and CS Lewis’s Chronicles of Narnia.  I was only ever a peripatetic listener in school holidays, on wintery afternoons, when it wasn’t possible to be outside.  During school terms, I listened only ever on a Wednesday:  our school day ended at 3.15pm.

So, that, and only having sons from other mothers, means that children’s television programmes are anathama.  What I did love, though, was sitting cuddled next to my granny while she read aloud.  The memories of her 1969 visit to South Africa, and this activity, are vivid.  She would sit in the middle of the sofa with her granddaughters on either side of her, a coffee table in front of her with a cigarette in a long black holder, smoking away in a large ashtray, while she clacked away with her knitting needles and read to us.

She read the tales of Beatrix Potter – not all of them, then, because we’d get one or two to add to the collection, each Christmas.  I don’t know what happened to them, but I do believe we had an almost complete collection.

It was not just Flopsy, Mopsy, Cottontail and Peter, but Tom Kitten, Squirrel Nutkin, Jemima Puddleduck, Mrs Tiggy-Winkle as well as Piggling Bland.  All names that cropped up all through my childhood including in the board game – also a Granny Christmas present.

Another much-loved set of characters was Little Grey Rabbit and her pals, Hare and Squirrel who danced around the may pole – among other things. It was also because of that series of books that I fell in love with The Speckeldy Hen and her speckled eggs.  I still love speckled eggs. 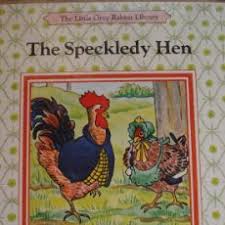 Source
When Granny couldn’t find another Beatrix Potter, it was a Little Grey Rabbit book that arrived in the post from Oxford, England.  We waited in anticipation, each Christmas and birthday.

Once I learned to read, I devoured books and would get as many as I possibly could out of the public or school library, often returning them early for a new crop.  I lived in those books and the pictures in my imagination were much more vivid and beautiful than anything on the covers or, I believe, film.

There is, though, something about listening to a story read aloud.  When we were a bit older, Granny sent another series:  all about Dr Doolittle, his dog, Gyp, and how Dr Doolittle could converse with animals.  By then I could read, and I’m not sure whether it was to spare her the agony of dispute resolution, or whether she wanted to read the books herself (that would have been me in her shoes), but Mum decreed, and would, read about a chapter an evening.  My sister and I would sit at her feet and listen in wrapt attention.

Source
It was only when I researched the various titles and authors of these books that I discovered that there was a vicarious link between CS Lewis and South Africa.  At the time, he was a member of the Literature Department at Oxford University, and a colleague of JRR Tolkein’s.  Tolkein was born in Bloemfontein, South Africa.  Tolkein’s The Hobbit and Lord of the Rings are among the most memorable reads of my adolescence and early adulthood, and when television wasn’t the ubiquitous and pervasive phenomenon it is today.  They are also books I read again and again.

To ask me what my favourite books are, is almost impossible.  I read many, and others I’ve not mentioned, remain in my memory.  Some – for reasons also connected to Granny – like AA Milne’s Winnie the Pooh, Now We are Six and Christopher Robin. When it came to other series, which, I suppose one could liken to a TV series, my two favourite ones were, again, from Enid Blyton:  The Secret Seven and The Famous Five.  At the time, Enid Blyton’s books were frowned upon as not “proper” reading material, but they did give (and I hope still do), millions of children a way of escaping their humdrum existences and at the same time instill in them a joy of reading.  Her Noddy series to which I’ve already referred, has had some rather drastic modernisation because, as a product of her time, characters reflected the mores of that period.  “Gollywog” is now unacceptable as a description, let alone as the name of a character, and similarly, to call a policeman “Big Ears” – because he needed them to keep his helmet from covering his eyes, just simply isn’t done.

It may seem that after we left the UK, and television, I might have had a deprived childhood, it certainly wasn’t missed.  My childhood was filled with fascinating worlds, colours and characters that lived in my imagination;  some still do.  The ones I’ve mentioned, are just a few – there were many, many others.

Looking for that gift for someone who has everything? Shop with Pearli in my evolving Redbubble shop –

And then there’s more:

In yet another aspect of my life –
English writing, research and online tutoring services

One thought on “Television? After school? Never!”