A woman in my family is a rape survivor.

August is Women’s month in South Africa with the 9th being the anniversary of the Women’s March to the Union Buildings in Pretoria, protesting the proposed pass laws which would effectively rent families apart.

The month is now dedicated to women in a country plagued by gender-based violence, and where the rate of femicide is probably among the highest in the world. With a constitution designed to protect the rights of all people, particularly the most vulnerable.

I wrote this post and what follows a year ago. The facts are correct and, sadly, and again, femicide in this country remains a pandemic of its own.  Just in the last few days, we have heard about the body of a woman was found on a trash heep in Cape Town (which symbolism doesn’t bear thinking about) and the bodies of five women have been found in sugar cane plantations in the last five months, sparking fears of a serial killer;  a young woman has come forward telling of her ordeal.  Perhaps at the hands of the same monster.

The events of the last ten days are of a country of mysoginists and malevolent patriarchs.  Five young women have been murdered and raped, either at the hands of strangers or of people they knew and had known intimately.  A girl-child of six was kidnapped (instead of her brother);  returned unharmed.

Nothing has changed.  I also shared these staggering figures: 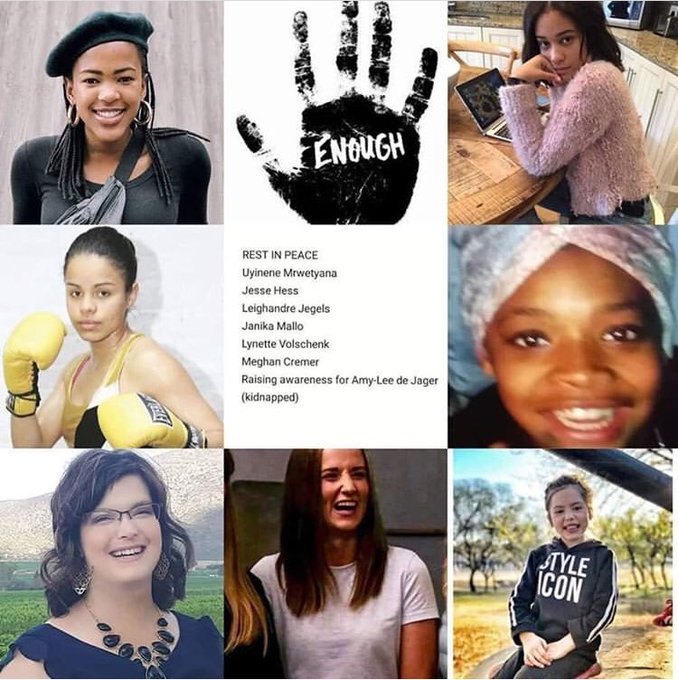 I went on to write specifically about the case of Uyinene Mrwetyana that felt close to home:  she went to school in my old home town and would have stayed just down the road from my childhood home;  one of her parents works at my alma mater.  The post office in which the she was raped and killed, is the post office I regularly used at one point, when I lived in Cape Town.  I now discover that her parents, and her childhood home is in the same East London suburb where my parents built a house in 1969.

Source
The torrent of terror and rage unleashed last year, have not abated.  Nor have calls for the reinstatement of the death penalty – ruled unconsititutional in an early and landmark ruling of our then young Constitutional Court.

There is no “typical” profile of the potential victim.  Our family member was not young, nubile, nor living an “out-there” life, in clubs, shopping and socialising.  In fact, she is quite the opposite:  a grey haired woman then approaching retirement age and who never wears makeup and only ever wears sensible shoes.  Her social life is defined by the church, U3A and the work she does with a group of special needs Girl Guides.  She lives alone with her dog in one of Cape Town’s leafy suburbs. This last didn’t bother us because far be it from either of us to rob her of her independence. What did worry us was the fact that she rarely used the garage:  anyone could see when she was (not) at home.  We said so.

One Thursday evening, she came home from one or other of her doings and thought it odd that Dog did not greet her.  The perpetrator had managed to open in a rear bathroom window, drugged the dog, and was waiting.

I understand the anger.  I also understand the wave of fear that continues to grip this country’s women and the knee jerk reaction asking for the reinstatement of the death penalty.  I recall my anger, wishing that the perpetrator would be caught and that yes, that he should die.

He has never been caught.  For all we know, he may still be watching.  Still raping women.  As with Uyinene’s killer, this man acted with intent.

I have always, and instinctively been opposed to the death penalty. This forced me to reflect:  why did I want this man dead?  Would it punish him, or would I feel a sense of vengeance and vindication if he were to be killed?

What Uyinene’s family has done

Violence begets violence and there is much research in the public domain that attests to this.  Capital punishment is, by definition, violent.  I do, however, have to wonder whether, in the case of certain criminals, death is not too kind.  Uyinene’s killer is in jail and will be for a long, long time.

I listened to Uyinene’s mum talk on the radio this morning, the first anniversary of her daughter’s death.  Her voice still cracking with grief.  While there’s that, there is how they have set out to celebrate her short life by setting up a foundation addressing social justice and particularly gender-based violence.  They say, “Uyinene was known to be inquisitive, forthright and vocal about the various social ills which plague our society – including patriarchal oppression and issues of gender-based violence.”

​How ironic.  The way she died. How appropriate, the Foundation’s mission:

to empower young people to stand against violence

To have such grace in the face of such pain.

My heart goes out to the families of women and girls who have no choice but to know this scourge.

I bleed for those self-respecting men who continue to hang their heads in shame.

I, like so many women, now think twice if I am somehow alone with a strange man;  it was not always so.  I  remain with South Africa’s women who are still asking #AmInext?

In yet another aspect of my life, I offer

And then there’s more: