When I grew up, Halloween wasn’t a thing. And it was.

In the 1970s, Halloween didn’t feature on the South African calendar. Somehow, though, it was always mentioned in our house. By my father. It had been a thing in his childhood and he’d talk of the night the spirits fly. He believed in things fey and in the second sight.  I was never poo-pooed for believing that fairies lived under the mushrooms that sprang up in the garden.  Nor was I disabused from believing that fairies had danced the night away in the garden when I found a circular ring in the lawn (after it had been mowed).  I have said before, that we have fairies in our garden.

My first, and only childhood memory of actually “doing” the Halloween thing, was an evening at church. Having gone to boarding school at 12, I have no memories of Halloween from my teen years.

I think it was 1973 or 4. I do know that it was preceded by a flurry of repainting and refurbishing the church hall.  In the photograph below, the hall is the building to the right of the church.

As I recall, my mother had been instrumental in sewing the new curtains and we’d all been involved in the painting.  More painted upon in the case of the children, than anything else.  I remember the only other members of my Sunday school class – two boys – chasing me around the paint tins and precinct;  both also went on to Rhodes, but that’s another story.

When I was searching for a photo of Trinity Presbyterian – I have none of that evening – and very few of that time of my life – I came across this photograph (in the now electronic archives in the Cory Library at my almer mater).  My heart turned over:  the man playing the bag pipes, fondly known as Uncle Bob, was the minister that evening – and for my entire child- and young adulthood. A real blast from the past.

Those bagpipes Uncle Bob’s playing, were my father’s. After my father’s abortive attempt at learning and teaching himself to play, they were sort of on permanent loan to Uncle Bob.  Himself also a Scot, having emigrated from Scotland, he played.  As he must have that evening, and as he did at every Burns Night at my parents’ home.  January jamborees that, after nearly 20 years, were Grahamstown legend.

The Cory Library which, then, was ensconced in the larger university library, was the site of my first ever paying job:  in 1979.

Back to that Halloween:

I’m not sure whether my memory’s playing tricks on me, or it’s what I want to remember, but I think that Scottish evening – Halloween – was a celebration of a job well done.

As I recall, there was Scottish country dancing, bobbing for apples and trying to catch scones covered in syrup and suspended by rope.  I also remember and looking for something – I cannot remember what, face first, in big (or so they seemed to me) zinc baths of flour.  Other details of the evening, I don’t remember.  I do, though, remember that it was one of the happiest of my childhood.  It was such fun!

Fast forward to the early 80s

Halloween 1982, I shall probably never forget.  Not because I did the “Halloween thing”, but rather because that week provided opportunities for trysts of a different kind.  I had not long met and fallen for a troepie.  As I’ve mentioned before, the 80s were a fraught time in South Africa; all young white men were conscripted.  Grahamstown (now Makhanda) is home to the Sixth South African Infantry Battalion which was also one of the camps at which conscripts “did” basic training.  And it is home to a university.  Quite a set of ingredients.

That year, one of the more “senior” conscripts was an old Rhodian.  His fiancé, until she graduated the previous year, had been in our residence; her sister was my contemporary.  Not only did said fiancé visit, but he brought some of his army mates along.

One of them had wiry blonde hair, bright blue eyes and the most glorious smile.  He was beautiful.  I fell.  So, it seems, did he.  In those days, getting out of camp was an issue.  Gentleman visitors in our residences (dorms), well, were not permitted beyond the common room. When eventually they were, it was certain evenings of the week, and from 7 to 10pm.  He and I spent a lot of time at the bioscope. Sort of watching two films in particular:  Terror Train and My Bloody Valentine. 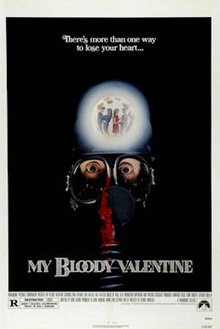 I must have really been smitten.  Even snogging in the back row of the  movies, I saw enough of both, to neither forget them, nor ever want to see them – or any other horror film – again!

I remember it as a fun, happy time, though.  It fizzled because – well this is my story – my parents would not allow me to go home with him (by train to Cape Town), and meet his parents. Of him, and the merry band from that short patch, I do have photographs.  However, in the interests of protecting the “innocent” involved, they remain stashed in a shoebox….

Grown up Halloween: in my silver years

It really is true that one’s never too old to have fun or to recapture some of one’s youth.  That Halloween wasn’t a “thing” in my childhood or youth hasn’t stopped me from getting into the spirit (ha!) of things in my more recent past.  Two years ago, and before Covid-19 was a thing, friends who had returned to the village and opened an establishment, “did” a Halloween evening.  The Husband and I got into the spirit of things:  he as a wizard, I as a witch. We were the best dressed couple (!).

I have to explain:  I shall always be a witch.  I was first accorded that title by the son from another mother.  Apparently, it was a no brainer because I drank lots of tea and had a familiar.

A ginger cat.  The Husband, when he arrived on the scene and tried to label me, was disappointed to discover that he was too late.

Now, I claim it.  Along with my own, designated transport, and which is generally parked next to the kitchen door.

This year, The Husband was my Pirate Wizard.  Always, and in deference to his and our roots, in traditional garb.

This time, I decided to lighten things with what I like to think of as my “fairy” witch’s hat.  Courtesy of our bloomin’ garden.

It’s never too late, especially with what we’ve all had to face in the last two years, to have a little fun and make new memories, as we did on All Hallows Eve, 2021.

I blog to the Hive blockchain using a number of decentralised appplications.

One thought on “Halloween: memories from the past, and not-too-distant past”